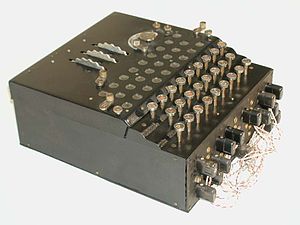 Enigma, 1923. Photo by Peter Mitterhofer, (CC-BY-SA 4.0).
A military unit of State B conducts a cyber espionage operation against State A’s Ministry of Foreign Affairs and its subordinate organizations. The data obtained in this operation is later published on the internet by State B.

Retrieved from "https://cyberlaw.ccdcoe.org/w/index.php?title=Scenario_02:_Cyber_espionage_against_government_departments&oldid=3420"
Categories:
Cookies help us deliver our services. By using our services, you agree to our use of cookies.