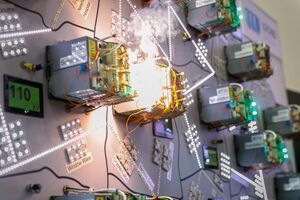 [L3] Incident 3a (reversible attack against the power grid) resulted only in a temporary disruption of the operation of infrastructure on State A’s territory (though it would be necessary to determine if death, injury or physical destruction was a foreseeable consequence of the cyber operation to reach a full conclusion). As such, it is doubtful if, under the present state of the law, this incident could have triggered the application of IHL.[17]

[L4] By contrast, incident 3b (cyber attack against several dams) occasioned considerable physical damage and the deaths of several individuals, which indeed were all foreseeable consequences of this kind of cyber operation. The fact that the operation was conducted by a group under the guidance of State B’s civilian intelligence agency and not its military forces does not make any difference in this regard.[18] On that basis, the effects of incident 3b can be described as comparable to those of classic kinetic operations, which would be sufficient for the purposes of applicability of IHL as long as there was a sufficient level of State involvement. This issue is considered in the following paragraph.

[L5] There is no doubt that State B has extended its support to armed group X throughout the relevant events. This has taken the form of financial support (incident 1), training and equipping (incident 2), and operational guidance and co-ordination (incidents 3a and 3b). The first two forms of support would not suffice for either of the tests of “effective control”[19] and “overall control”.[20] However, in combination with State B’s participation in the co-ordination of the cyber operation qualifying as a resort to armed force, the level of State B’s involvement would reach that required by the “overall control” test.[21] By contrast, the higher test of “effective control” would remain unmet on the facts of this scenario.[22]

[L7] The engagement between group X and State A may also, or separately, qualify as a NIAC,[23] based on the fulfilment of the requisite criteria of organization and intensity (analysed in the present section).

[L8] Group X appears to have sufficient organization, given that it was capable of carrying out sustained military operations of both kinetic and cyber nature,[31] although more details would be needed in practice before making a conclusive determination.[32] Note, however, that the organizational threshold is not particularly high, and the extent of organization certainly does not need to reach the level of organization of State armed forces.[33]

[L9] The threshold for intensity is relatively high and would certainly not be met by any of incidents 1–3a, given that the impact of these incidents was not similar to that of kinetic attacks.[34] In contrast, incident 3b, which resulted in the opening of floodgates of dams and then led to fighting that required the engagement of State A’s armed forces, would likely fulfil the requirement of intensity in the present case.[35]